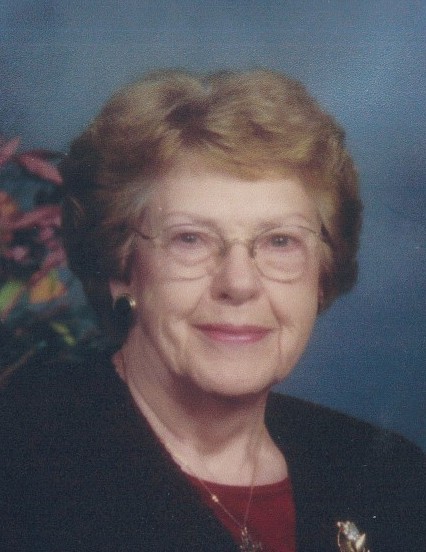 A celebration of life service will be held at 11:00 a.m. on Friday, Jan 24, at the Rosendale United Methodist Church.  Interment will be held in the church cemetery at a later date.  Visitation will be held from 5-7 p.m. on Thursday Jan. 23, at the Peterson Brothers Atwater Funeral Home and again one hour prior to service at the church.  Memorials can be made in her name to Habitat for Humanity of West Central Minnesota, Kandiyohi County Area Food Shelf, Atwater Area Help for Seniors, or simply do an act of kindness for someone less fortunate.  www.petersonbrothers.com

Donna was born October 16, 1926 in Lake Elizabeth Township, to Benjamin Franklin (Frank) Clough Sr. and Minnie (Bosch) Clough.  She attended Kandiyohi County District # 96. In 1945 Donna married Arlie Klatt, and they established their home south of Atwater. They had two children, Rebecca (Becky) and Marilyn. In addition to being a farm wife, Donna worked at Holm Brothers Hardware in Atwater for over 15 years.  Arlie died in 1974.  In 1977 Donna married Lester Swenson, and they lived on Lake Lillian until his death in 1995.  In 2001 Donna married Ben Sportel and moved to Roseland, where they lived until 2013 when declining health required them to move to Sunrise Village in Willmar. Ben died in 2014 and Donna moved to Sunnyview in Atwater. Her family is grateful for the attentive care she received from the staff at Sunnyview . She was also supported by Rice Hospice in the final weeks of her life.

Donna’s passions in life included caring for her family, growing large gardens, arranging flowers, taking care of pets, craft projects, and supporting numerous social causes. She spent countless hours volunteering her time for her churches, Habitat for Humanity, MOPS, Kandiyohi County Food Shelf, Crop Walk, and the DFL party. She strongly believed in “doing things that would make life better for all” and looked in particular for ways to help those who had been marginalized. Despite being slowed by health issues, Donna maintained her curiosity and passion for her family, nature and animals her whole life.

To order memorial trees or send flowers to the family in memory of Donna Sportel, please visit our flower store.