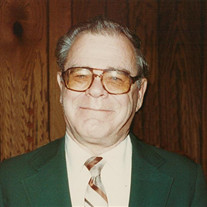 Memorial services will be held at 1:00 p.m. on Monday, February 6, at the Assembly of God Church in Willmar. Visitation will be one hour prior to the service at the church. Interment will be at Fairview Cemetery in Willmar. Military honors will be provided by the Austin F. Hanscom American Legion Post #167 of Willmar.

Donald William Krogfus was born July 30, 1923 in St. Paul, Minnesota, the son of Alvina Krogfus. He grew up in Willmar and was raised by his aunt and uncle, Sam and Frances Krogfus. He graduated from Willmar High School in 1943. He served in the U.S. Navy in the Pacific Theater during World War II. On August 7, 1945, he married Mary Alice Rahn and they made their home in Willmar. Donald was employed as a police office for 8 years and then as a State of Minnesota driver's license examiner for 27 years until his retirement in 1989.

He was a past member of First Presbyterian Church and Redeemer Lutheran Church. Donald was active as a scout master and advisor with the Boy Scouts of America Troop #220 at First Presbyterian Church. Donald was a member of the Assembly of God Church since 1985. He was a talented football player and was captain of his high school football team. Donald also a football coach for the Willmar Ward Football Central Dairy Team. He enjoyed fishing, hunting and watching football games.

Donald is survived by his two children, Susan Wells of New London and Don (and Laurie) Krogfus of Willmar; six grandchildren; eleven great-grandchildren; and one great-great-granddaughter; besides other relatives and friends.

He was preceded in death by his parents; his wife, Mary Alice in 2016; a son-in-law, Paul Wells; one granddaughter, Jeni Albrecht; one great-granddaughter, Kenley Jo Krogfus; and two brothers, Miles and James Krogfus.

To order memorial trees or send flowers to the family in memory of Donald Krogfus, please visit our flower store.