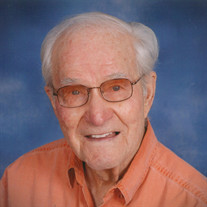 Funeral services will be held at 1:00 p.m. on Tuesday, February 23, at the Assembly of God Church in Willmar. Interment will be at Fairview Cemetery with military honors provided by the Willmar American Legion Post #167. Visitation will be from 5-7 p.m. on Monday, February 22, at the Peterson Brothers Funeral Home in Willmar (www.petersonbrothers.com) and will continue for one hour prior to the service at the church. Memorials are preferred to the Assembly of God Church for the Royal Ranger Program.

Donald Reuben Jacobson was born on April 12, 1922, in Willmar, Minnesota, the son of Jacob and Martha (Swanson) Jacobson. He grew up in Willmar and graduated from Willmar High School in 1941. From 1942 to 1945, Donald served stateside in the U.S. Army Air Corps as a flight instructor. On May 28, 1949, Donald was united in marriage to Phyllis Elaine Johnson and they made their home in Willmar. In 1953, Donald began a partnership with Robert Johnson and they owned and operated Central Sheet Metal Inc. in Willmar. In 1988, they merged their business with Chappell Duct, now known as Chappell Central Inc. of Willmar. Donald was also president of American Continental, Inc, of Willmar, a golf and utility cart company, and a past member of the Civil Air Patrol. He was a member of the Assembly of God Church in Willmar and was very active with the Royal Ranger and Frontiersmen Camping Fraternity programs. Donald's hobbies included hunting, fishing, golfing, wood carving and bird watching.

He is survived by his two children, Doug (and Kathleen) Jacobson of Roseburg, OR., and Pat Jacobson of Willmar; two grandchildren, Jennelle Ralston and Cristina (and Matthew) Cherry, both of Roseburg, OR.; and five great grandchildren, Zoey, Jake and Kyla Ralston and Levi and Micah Cherry. Also surviving are two sisters, Duane Eckholm and Marilyn Tengwall, both of Willmar, and one sister-in-law, Goldie Jacobson of Two Harbors, besides other relatives and friends.

He was preceded in death by his parents; his wife, Phyllis, in 1999; three brothers, Vernelle, Kenneth and Lawrence Jacobson and two brothers-in-law, Bill Eckholm and Reuben Tengwall.

To order memorial trees or send flowers to the family in memory of Donald Jacobson, please visit our flower store.