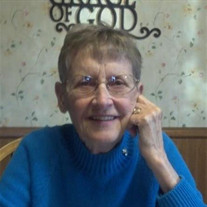 Memorial services will be 11 a.m. Saturday, September 16, at Tripolis Lutheran Church near Kandiyohi. Interment will be at Sparta Cemetery in rural Granite Falls. Visitation will be one hour prior to the service at the church. Arrangements are with Peterson Brothers Funeral Home in Willmar, www.petersonbrothers.com.

Deloras Henrietta Griffin was born November 26, 1928, in Wheaton, Minnesota, the daughter of Axel and Julia (Anderson) Johnson. She grew up and received her education in the Sisseton, South Dakota area, graduating from Sisseton High School in 1946. She then worked at the Wheaton Elevator as a bookkeeper becoming their first female employee. On May 15, 1949, she married John T. Hagberg and they made their home in Wheaton. 1963, they moved to Appleton, where they operated the Gambles store. In 1972, they moved to Luverne, where Deloras worked at Cook's Clothing. They moved to Willmar in 1982 and she worked at JC Penney. John died in 1991. Deloras later met Arthur Griffin and they were married August 27, 1995 and remained living in Willmar.

Deloras was an active member of Tripolis Lutheran Church, where she was involved with circle, quilting, and many other church activities. She was also an active member of the Willmar Senior Citizens and greatly enjoyed square dancing. She was very talented with crafts and enjoyed sewing, crocheting, quilting, stamping, and making cards. Deloras also enjoyed puzzles and playing cards.

She is survived by her husband, Arthur Griffin of Willmar; four children, Victoria (and Keith) Sandberg of Granite Falls, Mark (and Teresia) Hagberg of Amarillo, TX, Cindy (and Clark) Agnew of Lubbock, TX, and Kirk Hagberg of Bellevue, NE; eight grandchildren, Michelle (and Travis) Schmidt, Marsha (and Shawn) Gilbertson, Karen (and Shawn) Firle, Sarah (and Corey) Meyer, Braxton Agnew, Samuel Hagberg, and Devin Hagberg; and many great-grandchildren; Arthur's sons, Michael Griffin of Tyler, Darin Griffin of Clarkfield, and Todd (and Julia) Griffin and their son Anthony of Rice; many nephews and nieces; and other relatives and friends.

To order memorial trees or send flowers to the family in memory of Deloras Griffin, please visit our flower store.