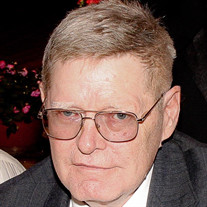 Graveside services will be 12:45 p.m. Tuesday, May 30, at Ft. Snelling National Cemtery in Minneapolis. Visitation will be 1-4 p.m. Sunday, May 28, at Peterson Brothers Funeral Home in Willmar. In lieu of flowers, memorials are preferred to the local Toys for Tots program.

David Charles Swanson was born March 3, 1943, in Willmar, Minnesota, the son of Eugene and Leone (Peterson) Swanson. He grew up in the Willmar-Spicer area and graduated from Willmar High School in 1961. On March 25, 1967, he married Vivian Jo Pals. David served in the U.S. Marine Corps and was stationed in El Toro, CA; Belgrade, Yugoslavia; and Stockholm, Sweden. He then began a career in the U.S. Army, serving in Vietnam and later being stationed in Ft. Lewis, WA; Ft. Hood, TX; Stuttgart, Germany; Ft. Leavenworth, KS, den Hauge, Netherlands, and Helsinki, Finland. He retired from the Army in July 1985 and David and Vivian made their home in Willmar. David then attended Ridgewater College and Metropolitan State University to obtain his degree in accounting. Following graduating, David worked as an inspector for the Bureau of Alcohol, Tobacco and Firearms until his retirement in 1997. David was a member of the V.FW., American Legion, D.A.V., The Forty & Eight, and the Eagles Club. He enjoyed his collection of model trains, and hunting and fishing with the D.A.V.

David is survived by his wife of 50 years, Vivian; three sons, Dave (and Ann) Swanson of Eagan, Mike (and Liz) Swanson of Burnsville, and Tim Swanson (and friend Nicole) of Willmar; three grandchildren, Ben, Claire, and Caitlyn; a sister, Mary (and Bob) Rolfes of Mankota; a sister-in-law, Mitsuko Swanson of Oak Harbor, WA, a brother-in-law, Carsten Slostad of St. Paul; and other relatives and friends.

He was preceded in death by his parents; and two brothers, Edward Swanson and Robert Swanson.

To order memorial trees or send flowers to the family in memory of David Swanson, please visit our flower store.