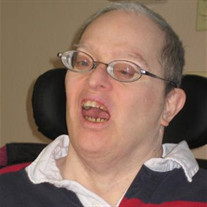 A graveside service to remember Dave will be held at Fort Snelling National Cemetery in Minneapolis, Minnesota on Tuesday May 16th, meeting at the Main Entrance Building at 11:30 a.m. Following the interment, guests are invited to a reception at 17246 Knox Path, Hastings, MN.

David was born on October 29, 1951 in Tracy, Minnesota. He was the second oldest of five children born to Frank and Eileen (Sceli) Huberty. After short stays in Tracy and Litchfield, Dave lived most of his life in Willmar. He attended the Meeker-Kandiyohi Day Activity Centers in Kandiyohi and Atwater and he enjoyed summer camps at Kamp Kandi on Robbins Island, Shores of St Andrew at Lake Andrew, and Rolling Acres in Annandale. He was an avid Special Olympics participant for many years and enjoyed traveling with his family.

Dave is survived by four siblings: Dennis (Woodbury), Paul (Minneapolis), Barb (St. Paul) and Brian (Hastings), along with Dennis's family: wife Christy; Scott, Abby and Spencer (Salt Lake City), Mark and Grayce (St. Paul), and Eric and Anna (Seattle). David was preceded in death by his parents. David will also be missed by Beckie and Cliff Schaefer of Litchfield, who were David's legal guardians for the past seven years.

Memorials may be given in David's name to the Kandiyohi County Association for Retarded Citizens; 200 4th Street Southwest Suite 25; Willmar, MN 56201

To order memorial trees or send flowers to the family in memory of David Huberty, please visit our flower store.