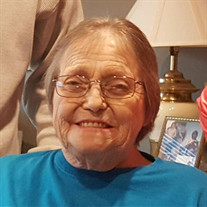 Funeral services will be 11 a.m. Monday, August 14, at Peterson Brothers Funeral Home in Willmar. Interment will be at Cloverleaf Cemetery in Willmar. Visitation will be one hour prior to the service at the church.

Constance Joan Carey was born April 7, 1941, in Jefferson County, Kentucky, the daughter of Albert and Irene (Black) Beckham. She married Thomas Carey in Indiana. Connie was baptized as one of Jehovah's Witnesses on May 18, 1968. They later moved to Woodbury, Minnesota, where Connie worked as a nurses aide at the Woodbury Health Care Center. Connie and Thomas later divorced. Connie moved to South St. Paul, Minnesota, where she met her significant other, Dakota "Roy" Broda. Connie and Dakota later moved to Askov, Minnesota. After Dakota's death in 2009, Connie moved to Spicer, Minnesota, to live with Dakota's daughter, Deborah Jahnke. Connie later moved into Willmar and had resided the past few years at Bethesda Senior Living in Willmar. Connie enjoyed playing games (especially Bingo), word-finds, chocolate. watching TV, and visiting and laughing with others.

She is survived by four sons, Stephen (and Lori) Carey, Trevor (and Julie) Carey, Spencer (and Lisa) Carey, and Troy Carey; two daughters, Rachel (and Thomas) Pawlowski, and Kathy Carey; a stepdaughter, Deborah (and Daryl) Jahnke; many grandchildren and great-grandchildren; a brother, Vern "Beck"; two sisters, Sharon and Wanda; and other relatives and friends.

Connie was preceded in death by her parents; her significant other, Dakota "Roy" Broda; her ex-husband, Thomas Carey; and a sister, Maxine

To order memorial trees or send flowers to the family in memory of Constance Carey, please visit our flower store.