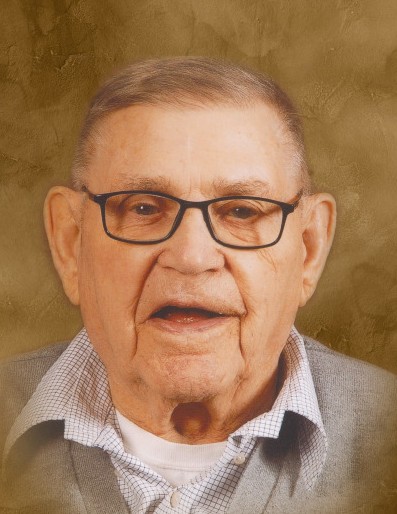 A Celebration of Life Service will be held at 10:00 AM on Saturday, Feb. 22, at First Presbyterian Church.  Interment will be at Calvary Lutheran Cemetery with military honors provided by the Willmar American Legion Post.  Arrangements are with Peterson Brothers Funeral Home in Willmar.  www.petersonbrothers.com

Clifford Andrew Andreen was born on January 19, 1924, in New London, Minnesota, the son of Andrew and Anna (Jensen) Andreen.  He grew up and received his education in New London and was baptized and confirmed in the Lutheran faith.  In 1942, Clifford enlisted in the U.S. Navy.  Following his discharge, he worked as an auto mechanic in New London and later at Johnson-Geere Auto Company in the parts department.  On September 8, 1945, Clifford was united in marriage to Lois Mae Lang and they lived in the New London area.  In 1954, they moved to North Park, Illinois where he was employed with Rockford Blacktop Construction Company.  In 1962, the moved to Willmar and Clifford began employment with Duininck Brothers & Gilchrest Construction as a mechanic, retiring in 1986.  He was a member of the First Presbyterian Church, Fraternal Order of Eagles and the American Legion Post.  His hobbies included traveling, fishing, camping playing bingo and visiting the area casinos.  Clifford will be remembered for having a kind, gentle and soft heart, quick witted, a jack of all trades and a fix-anything can-do attitude.

He was preceded in death by his parents; his wife, Lois in 2013; one son, Robert in 1990; five brothers, Ludvig, Peter, James, David and Donald Andreen and three sisters, Adeline, Evelyn and an infant sister.

To order memorial trees or send flowers to the family in memory of Clifford Andreen, please visit our flower store.