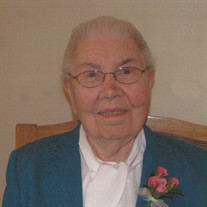 Clay Cecil Wickstrom was born on August 27, 1914, in Kane, Illinois, the daughter of John and Minnie (Sterns) Scoggins. Her father died on August 9, 1914 before she was born. Her mother passed away in July of 1921. Clay then lived with her Uncle Wid and Aunt Cecil Hardwick in Whitehall, Illinois until September 10, 1923. At that time when she was nine years old, arrangements were made for Clay to move to the George and Almeda Enblom home southwest of Atwater, Minnesota. They adopted Clay on October 20, 1926. Her adoptive mother passed away in 1932, and Clay continued to live with her father and Aunt Emma Berg, who helped care for her. Clay grew up and received her education in the rural Atwater schools and graduated from Atwater High School in 1933. Clay worked as a telephone operator in Atwater from February 1944 until shortly before her marriage in 1958. On September 12, 1958, Clay married Arnold Wickstrom at her father's home. They continued to live in Atwater until 1988, at which time they moved to an apartment in Kandiyohi. In 1992, they moved into the Highland Apartments in Willmar. They were blessed with nearly 40 years of marriage before Arnold passed away on August 15, 1998. Clay continued to reside in their apartment until December of 2010, when she moved to the Scandia Home in Willmar.

Clay was a kind and loving wife, sister, aunt and friend to many. She cherished her many special friends and extended family and will be greatly missed. She enjoyed reading, especially her bible, knitting, crocheting, letter writing, cooking and visiting. She was a woman of strong faith who at the age of 16 professed her faith and was baptized soon after.

Clay is survived by several nieces, nephews, other relatives and friends.

She was preceded in death by her parents; her adoptive parents; her husband; Aunt Emma Berg; three brothers, John, Lafayette and Lumie; one sister, Tina; and a half-brother, Lewis Williams.

To order memorial trees or send flowers to the family in memory of Clay Wickstrom, please visit our flower store.