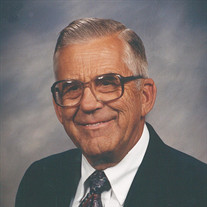 Chester "Chet" J. Flack, age 81, of Willmar, died Tuesday afternoon, January 19, at his home in Willmar. Chet fought a long battle with cancer and is now at peace.

A celebration of life service will be held at 11:00 a.m. on Monday, January 25, at Vinje Lutheran Church in Willmar. Visitation will be one hour prior to the service at the church. Military honors will be provided by the American Legion Post #167 of Willmar. A private interment will be at Fairview Cemetery.

Chester J. "Chet" Flack was born in Starbuck, MN on April 10, 1934, the son of Ottar A. and Helen (Nordberg) Flack. He attended country school in district # 92 for 8 years and then graduated from Starbuck High School in 1952. From 1952-1954, Chet attended Concordia College in Moorhead, MN where he was a member of the Concordia Concert Choir. In 1954-1956, he served in the United States Army. Chet was married to Ramona Steinley on March 26, 1955. He was stationed in Korea on an Army Security Agency Outpost for one year and in 1956, he returned to Concordia and received his degree in 1958. He taught mathematics in Henning, MN for two years and then was employed as the high school principal in Graceville, MN (1960-64) and Elbow Lake, MN (1964-66). In 1966, the family moved to Granite Falls, MN. At Granite Falls, Chet served as the high school principal for nine years and then as the Superintendent of Schools for fifteen years. He had a special interest in Vocational Education, Special Needs Education and in the value of students participating in extra-curricular activities. Chet attended graduate school and received a Master's Degree from the University of Minnesota in 1962, and a Specialists Degree from Mankato State University in 1976. While in Granite Falls, he was a member and president of the Kiwanis Club and served on the Granite Falls Chamber of Commerce. He was a member of Granite Falls Lutheran Church. He served on the church council and sang in the church choir.

In 1991 he retired. During retirement Chet and Mona enjoyed cruises, car trips and his all-time favorite trip was to Norway where he was able to visit relatives who lived on the original homestead of his grandparents. Chet and Mona moved to Willmar, MN in 1992.

In Willmar, Chet was an active member of Vinje Lutheran Church. He sang in the church choir for 15 years, served as a member of the church council, was a participant in Men's Bible Study and was a friendly visitor. He was a volunteer at Rice Memorial Hospital and was an active member of the Willmar Noon Kiwanis for 14 years. Chet's favorite times were summers, when the family spent time at their lake cottage on West Battle Lake. In addition, he enjoyed woodworking, fishing and was an avid golfer. He especially enjoyed spending time with his three children, nine grandchildren and three step-grandchildren.

He is survived by his wife, Mona of Willmar; daughters, Lori (and Jim) Velde of Detroit Lakes, Lisa (and John) Diekman of Victoria and son, Greg (and Shari) Flack of Lakeville; nine grandchildren; three step-grandchildren; and one great-grandson. Also surviving is his sister, Karen (and Dick) Hammero of Cottage Grove and his brother Al (and Jean) Flack of Park Rapids, besides other relatives and friends.

He was preceded in death by his parents and grandparents.

To order memorial trees or send flowers to the family in memory of Chester Flack, please visit our flower store.