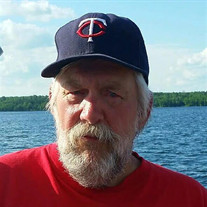 Memorial services will be 10 a.m. Saturday, July 30, at East Norway Lake Lutheran Church in rural New London.  Visitation will be 5-7 p.m. Friday, July 29, at Peterson Brothers Sunburg Funeral Home in Sunburg and will continue one hour prior to the service at the church. Military Honors will be provided by Robert Ihlang American Post 537 of New London.

Charles James Syverson was born January 25, 1951, in Benson, Minnesota, the son of Floyd and June (Christenson) Syverson.  He grew up in Clontarf and later moved with his family to Pennock.  He graduated from Willmar High School in 1969.  Jim served in the U.S. Army during the Vietnam Era and was stationed in Georgia.  In October 1971, he married Linda Olson and they lived in Georgia.  Following Jim's discharge in 1973, they moved to the Sunburg area and Jim began working in construction.  In 1982, they moved to Sydney, Montana and in 1987, returned to the Sunburg area.  Jim worked in construction all around the country, mainly working with Commercial Contractors Company of Melrose.

Jim will be remembered for his work ethic and his sense of humor.  He was always joking and laughing, and loved giving gag gifts to family and friends.  He loved his dogs and enjoyed playing pool and fishing, especially fishing with his brother-in-law, Rick.  Jim and Rick also spent a lot of time "shopping" on K-Bid. His family was his greatest love and he loved time spent with them, especially his grandchildren.

He is survived by his three children, Jami (and Christy) Syverson of Minnetonka, Kelly (and Allen) Rooney of Sunburg, and Lacey Scheierl of Paynesville; his former wife, Linda Syverson of Sunburg; six grandchildren, Aren Syverson, Audrey Syverson, Madison Scheierl, Jayden Scheierl, Kellan Scheierl, and Jake Kent; a brother, Richard (and Judy) Syverson of Bigfork, MT; a sister, Judy Jones of Litchfield; two brothers-in-law, Rick (and Cathy) Olson of Brooten and Brad (and Wendy) Olson of Andover; and one uncle, Oral (and Doris) Landsverk of Benson; his nieces and nephews; and other relatives and friends.

He was preceded in death by his parents; three brothers, Bill Syverson, Gary Syverson and Doug Syverson; and a brother-in-law, Red Jones.

To order memorial trees or send flowers to the family in memory of Charles Syverson, please visit our flower store.