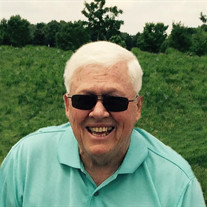 Charles was born on April 4, 1940, in Willmar, Minnesota to Charles and Adeline Robinson. He grew up in Willmar and graduated from Willmar High School in 1958. On November 7, 1959, in Willmar, he married Diane Annette Johnson. They were married for 53 years. Charles chose the U.S. Air Force as his career path, which took them to many different places throughout the Orient, Europe and United States, including Duluth and New London, Minnesota. He retired after 20 years of service which was where he met his best friends in the world, Vern and Aida Sorenson. Their families joined as one.

Charles was a very active young man. He enjoyed his golf with his good buddies, Joe and Irma Tolin and Raymond and Carole French, and many more friends. Charles also enjoyed hunting, fishing, painting, woodworking and listening to "old time" country music. He always had a smile on his face with a happy go lucky sense of humor. He was always making people laugh with his jokes and his wonderful personality. He looked forward to every fall so he could spend time with his sons, Scott and Bret, his grandson Chris, his best friend Vern, Vern's brother "The Colonel", good friend Clint Wilson, and many more. Family was a huge part of his life and loved spending time with them. He was a strong military man with a kind and loving heart. On Sunday's you could find Charles at Cross Pointe Baptist Church with his current wife Yasue Yokozeki-Gordon Robinson, that were married on February 7, 2016.

To order memorial trees or send flowers to the family in memory of Charles Robinson, please visit our flower store.