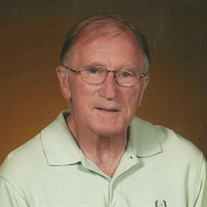 A celebration of life service will be held at 1:00 p.m. on Friday, August 5, at Peterson Brothers Funeral Home in Willmar. Interment will be at Cloverleaf Memorial Park Cemetery in Willmar. Visitation will be one hour prior to the service on Friday.

Charles Roger Olson was born May 19, 1937, in Willmar, Minnesota, to Lars and Gladys (Stene) Olson. He was a direct descendant of Gurri Endresen. He attended school in Willmar and graduated from Willmar High School in 1957. After working odd jobs, began working for the Kandiyohi Electric Cooperative in Willmar, retiring after 41 years of service. He married Beatrice Sietsema on September 2, 1961. They made their home in Willmar and went on to have two children, Todd and Jodi. Charlie enjoyed playing softball, bowling, golfing, traveling, and spending time with his grandchildren.

He was preceded in death by his parents; his wife, Beatrice Olson in 2012; a sister, Nona Torbert; and a brother-in-law, Gary Torbert.

To order memorial trees or send flowers to the family in memory of Charles Olson, please visit our flower store.