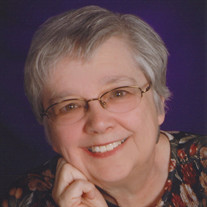 A Celebration of Life Service will be held at 1:30 p.m. on Thursday, November 8, at Calvary Lutheran Church in Willmar.  Interment will be in the church cemetery. Visitation will be from 5-7 p.m. on Wednesday, Nov. 7, at Peterson Brothers Funeral Home and will continue for one hour prior to the service at the church.  www.petersonbrothers.com

Carol Jean Eekhoff (Heck) was born on July 8, 1946, in Minneapolis, Minnesota, the daughter of Merritt and Muriel (Rohloff) Heck. She grew up in Brooklyn Park and graduated from Anoka High School in 1964 and then began working for Aetna Insurance in downtown Minneapolis. On July 25, 1970, Carol was united in marriage to Doyle Stanley Eekhoff and they made their home in Spicer. In 1972, they moved to Willmar when Doyle started his own plumbing business. Carol worked for Strehlow Insurance Agency and later became the bookkeeper for Doyle's plumbing business, Doyle's Plumbing and Heating of Willmar, retiring in 1997. Carol was very involved at Calvary Lutheran Church, specifically being the kitchen coordinator for the funeral committee. In her spare time, she enjoyed researching genealogy with her sister Jan and other friends.

She is survived by her husband, Doyle of Willmar; two children, Brian (and Rosanne) Eekhoff of Melrose and Dawn Paar of Richmond, VA; four grandchildren, Justin, Kiersten, Ben and Samantha and one great grandson, Bradley. Also surviving is one sister, Janice Heck of Willmar and a sister-in-law, Leilaani Heck of Minneapolis, besides many nieces and nephews, other relatives and friends.

She was preceded in death by her parents and one brother, Brian Heck in 1999.