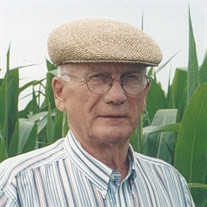 Calvin Nathan Dykema was born November 25, 1933, on the family farm near Roseland, Minnesota, the son of Simon and Johanna (Hoekstra) Dykema. He grew up and attended country school in the Roseland area. He began working for Harry and Kasjen Tebben on their cattle farm. From 1954 to 1956, he served in the U.S. Army and was stationed in Germany during the Korean War. On August 31, 1957, he married Carol Clough at First United Methodist Church in Raymond. They lived in California, where Calvin worked at El Dorado County Club. They later returned to Raymond and Calvin worked in road construction for many years working for Duininck, Berghuis, Minnesota Valley and Lundin Construction Companies until his retirement. He had a passion for farming and, in retirement, he helped several area farmers on their farms.

Calvin was a member of First United Methodist Church, the Raymond Lions and the Clara City American Legion. In his younger years, he was a member of the Roseland Sportsmen's Club and enjoyed hunting and fishing. Calvin will be remembered for his honesty, integrity and work ethic. He loved working with the land whether it be working with his crews, moving earth, farming or gardening. He also loved visiting with people, especially if they were discussing farming.

To order memorial trees or send flowers to the family in memory of Calvin Dykema, please visit our flower store.