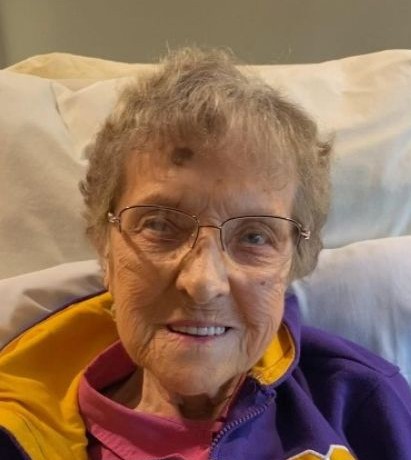 Funeral services will be held at 11:00 a.m. on Tuesday, Nov. 15, at Calvary Lutheran Church.  Interment will be at Fairview Cemetery.  Visitation will be from 5-7 p.m. on Monday, Nov. 14, at Peterson Brothers Funeral Home and will continue for one hour prior to the service at the church.  Arrangements are entrusted to the Peterson Brothers Funeral Home.  www.petersonbrothers.com

Betty Lue Berg was born on September 6, 1936, near Royalton, Minnesota, the daughter of Frederick and Gertrude (Zuleger) Doble.  She grew up in Royalton and graduated from Royalton High School in 1954.  Betty moved to Minneapolis and worked at Honeywell Corporation for 7 years.  On August 8, 1958, she was married to Angelo Pogreba and they made their home in Minneapolis.  In 1961, they moved to St. Cloud and in 1971 they moved to Willmar.  On October 5, 1972, Betty was married to Gordon Berg and they made their home in Willmar.  Betty worked at Juba’s Super Value Foods, John’s Supper Club, Timbers Restaurant the American Legion and Leader’s Manufacturing.  Following her retirement in 1998, she continued working with her own cleaning service and assisted her friend, Sue Iverson with babysitting.  Betty enjoyed being with her family and friends, attending sporting events and plying basketball with her grandchildren.  She also enjoyed being outdoors, walking, gardening, yard work and going out for dinner.  Betty will be best remembered for her hard work ethicand her homemade cookies.

She is survived by her four children, JoAnn (and Jeff) Ballman of Glencoe, Debra Ann (and Kirk) Delp of Willmar, Kevin Pogreba of Willmar and Mary Pogreba; twelve grandchildren and eight great grandchildren.  Also surviving is one brother, Raymond Doble of Minneapolis; two sisters, Alice (and Eddie) Burggroff of Little Falls and Dorine Miller of Minneapolis, besides other relatives and many friends.

She was preceded in death by her parents; three brothers, Eugene, Adrain and Donald; and four sisters, Irene, Lorraine, Donna and Eleanor.

To order memorial trees or send flowers to the family in memory of Betty Lue Berg, please visit our flower store.
Open