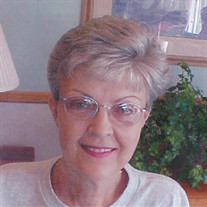 
Barbara Arlene Erickson was born on May 6, 1943, at Rice Memorial Hospital in Willmar, to Gordon and Arlene (Peterson) Manthei.  She was confirmed on April 14, 1957 at Svea Lutheran Church of Svea.  Barbara graduated from Willmar Senior High School in Willmar, Minnesota in 1961.  She went to California and came back to reside in Svea.


She attended and graduated from Willmar Technical Institute in 1972.  On May 9, 1964, Barbara was united in marriage to Paul Walter Erickson.  They were married at Svea Lutheran Church by Rev. A. B. Pearson.


They lived on the Erickson family farm near Lake Lillian following their marriage.  They built a home in Blomkest in the early 1970s. While living in Blomkest they attended Blomkest Baptist Church. They were married for 36 years.  Paul passed away March 1, 2000.


Barbara was blessed with raising three children: Jon, Kim Marie, and Von.  Now through the years Barbara had five grandchildren and six great-grandchildren and has a son-in-law (Bob Spacy for 23 years).


Barbara was a dedicated mother through her years being a homemaker and had an in-home beauty shop in town. Also during this time, she was a beautician for Peterson Brothers Funeral Home.  In 1984, she owned and operated Starliner Fashions in the mall.  Around 1985, they moved to Willmar and Barbara was employed by Herberger's and was Head of Sales for 10 years. She was a member of Assembly of God Church in Willmar.  She loved and enjoyed worshiping the Lord and watching Christian television programs.  After a tragic bicycle accident on April 17, 1994, Barbara was hospitalized in several facilities in Minneapolis.  She returned to Willmar and has resided at Pleasant View Nursing Home for 20 years.  What Barbara loved the most, was staying connected with family and friends. She enjoyed music and cooking.  She had a past interest of restoring furniture.  She  enjoyed watching her favorites: Walker Texas Ranger (Chuck Norris), Little House on the Prairie (Michael Landon) and Matlock (Andy Griffith).


She is survived by her children: Jon Erickson (and ex-daughter-in-law, Debi) of Willmar, Kim Marie (Erickson) Spacy (and Bob) of Phoenix, AZ, and Von Erickson of Blaine; five grandchildren: Russell, Tristin, Anthony, Amanda, and Mikala; six great-grandchildren: Johnathon, Wyatt, Owen, Luke, Emmalyn, Aleah, (and one on the way); eight aunts; three uncles; and other relatives and friends.


She was preceded in death by her parents; her husband: Paul in 2000; her grandparents; and several aunts and uncles, including her special uncle: Marvin in July 2015.

To order memorial trees or send flowers to the family in memory of Barbara Erickson, please visit our flower store.