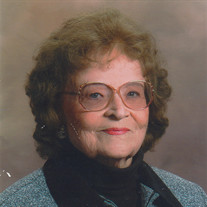 Velora Ann Rust was born on December 30, 1924, near Roseland, Minnesota, the daughter of Thomas and Sophie (Stadther) Svobodny. She grew up in the rural Roseland community and received her education from the District #87 country school. On September 5, 1945, Velora was united in marriage to Bradley C. Rust and they made their home in Willmar. Velora was employed for many years at Thrifty White Drug. Her hobbies included fishing, dancing, playing card games and visiting the local casinos.

She is survived by one daughter, Sandra Rust of New London; two grandchildren, Mark (and Cindy) Peterson of Plymouth, MI, and Pamela (and Mike) Marsiglia of Ypsilanti, MI; three great grandchildren, Marissa Peterson, Miranda Peterson and Morgan Peterson, and one brother, Clyde (and Gladys) Svobodny of Willmar, besides other relatives and friends.

She was preceded in death by her parents; her husband, Bradley in 2004; one son, Gregory in 1997; one daughter, Renae in 2012; and two siblings, Raymond Svobodny and Margaret Breitkreutz.

To order memorial trees or send flowers to the family in memory of Velora Rust, please visit our flower store.